One more day preparing the camp to be packed. All in camp (except Sarah who produced food miracles) united forces to empty and free the Carpenters Garage.

The garage was set up as one of the first structures in 2008 and the floor of the garage is 4-5 m below the present surface. On the backside snow reaches the top of the garage. After Gunnar had removed as much was possible behind the garage with the PistenBully, Gunnar and Rune used snow blowers to lower the snow around the garage.

Finally hammers, spades and chain saws were used to remove the up to 1 m thick ice blocks on the flaps of the garage. Inside Helle, Paul and Alejandra took down the storage system and bundled it to be transported to Kangerlussuaq. The honour of cutting two of the top beams with a chain saw was given to the birthday boy Paul. 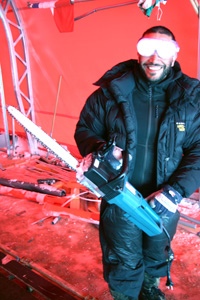 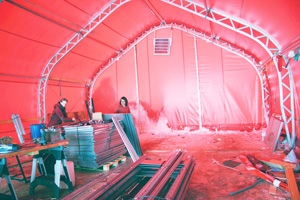