NEEM is closed and we are out

It has been a dramatic day. The plane was scheduled to arrive at NEEM at 1045; but due to technical issues the departure from Kangerlussuaq was delayed.

Final day of packing. Tomorrow we fly out – hopefully

It has been an unusual day. Outside, a group cleaned the camp area and packed the last items. Inside the dome, a group was busy cleaning the kitchen and the first floor.

It has been a wonderful day. It was nice and cold with lots of sunshine.

Blizzard has passed – back to work

Luckily this was not a multi-day blizzard. When we began to work weather was fine again, and nice cold for a change.

NEEM camp is condensing, and today a big task is completed.

Temperatures took a welcome step down

We were about to become tired of walking about in slush in the gloom of
dense overcast ...

A rainy day at NEEM

Today it rained at Noon. Most of the day temperatures have been over 0°C.

We celebrated the last Saturday evening at NEEM with a new heat wave arriving.

Preparing to close the science trench

The drill trench is not anymore. And we are preparing to close the science trench.

Packing continues - this time in sunshine

Packing down camp equipment onto heavy sleds has its own rhythm.

Today we finished packing all drilling equipment onto a heavy sled, and the area around the former drill trench is now clear of cargo.

Yet another meltlayer has formed in 20 cm depth

As testimony to the unusual warm weather since mid-July, another layer of
refrozen water has formed in the past three days.

The ice block throwing competition was postponed, because the blocks were melting!

NEEM icelympic games are on

None of us here at NEEM can follow the Olympic games,so we have created NEEM icelympic games.

A rainy and windy Saturday

We woke in the morning to the patter of raindrops on tents and on the dome.

NEEM gets hit by another heat wave

As forecasted NEEM today was hit by another heat wave.

All afternoon we were digging and chopping ice.

The “drill trench” is now just a hole in the ground

On this gray and snowy day we removed the last infrastructure from the
drill trench.

We got an extra plane today

As the 109th needed another training mission, Skier 32 paid us a visit at
Noon. We were told about this the day before

Last scheduled plane in this period

The packing down in the drill trench goes fast. Sunday until late and
Monday morning everybody was busy.

Goodbye to the winch

The winch is too heavy for the cat to lift into the Skier so the skiers need to winch the pallet into the aircraft.

The winch is moved out of the drill trench

The heavy winch has to be pulled out of the drill trench by the inclined
ramp that has been opened.

Today Paul, Helle, Rune, Alejandra and Allan left us – we will miss you.

The termination of the NEEM deep drilling after 6 years is a big event.

With the drillers, loggers and seismic teams the camp is running full speed.

Finally we have had a cold night and the snow surface is hard again.

Barbeque in the Blue

Today a day with temperatures below zero, sunshine and no wind.

The unusual warm weather continues and it is clear that we will need to wait until the surface cools.

Friday the 13th – not a good flight day!

If you are superstitious don’t fly Friday 13th ….

Going into the third day with + temperatures.

We woke up to a totally overcast day with rain!

At 06:00 in the morning the weather was -10 °C and the preparations for departure of Polar 6 started.

After a brunch with omelettes and pancakes the day started gently. 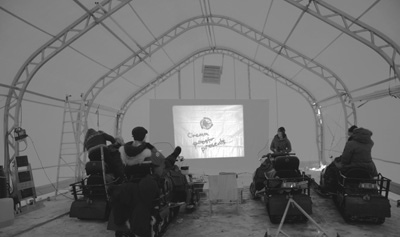 Saturday evening – the long waited fun time of the week. For the first (and probably only time) NEEM opened the skidoo Drive-In Cinema.

The mysterious eighth camp member Motohiro has been absent from the
pictures the last days and today he will be featured in the NEEM Diary.

One more day preparing the camp to be packed. All in camp (except Sarah who produced food miracles) united forces to empty and free the Carpenters Garage.

Today was 4th of July, so we planned an American meal with barbequed chicken, potato salad and blueberry pie.

Not much news to tell because the packing just goes on.

Again a very nice and sunny day with low winds and we decided it was the day to take the sauna garage down.

Sunday morning is always peaceful and the sunny weather made it reall nice.

Our first Saturday at NEEM

The day to dig the 2m deep pit has come and Paul, Helle, Motohiro, Alejandra and Rune finds a spot on the line of the clean area 2 km from camp.

Again a wonderfully warm and sunny day. We settled on small tasks today and all were busy in camp.

The low winds made this a perfect day for outdoor work and we decided to take the red dome down.

Water under the ice

It appears that the deepest part of the borehole is filling up with water that freezes in.

A final day of high winds?

After another day of blowing snow, high winds, complete overcast, and high temperatures the skiway is not in a good condition to receive an airplane.

A large stone in the borehole

Today Steff and Trevor went down with the rock drill to investigate if ice
has formed in the deepest part of the borehole. .

The weather forecast predicts stormy conditions for Monday, just before the flight mission scheduled for Tuesday..

The weather is still collaborative and we’ve spend the day preparing for the flight scheduled for next Tuesday.

Hurrah, after a week of overcast we saw the Sun today!

‘Any improvement is temporarily’

It is now definitely summer time at NEEM with today’s temperature reaching a maximum of -1.1°C.

We had high winds all day and could not do much outdoor work. .

The day started out with overcast and snow showers, but winds were low, so we optimistically started blowing the ramps free of snow.

Today the high winds had disappeared and we could inspect the new dunes of freshly deposited drift snow all around camp.

Today we had storm with average wind speed around 30 knots (16 m/s) occasionally rising to 35 knots.

Windy conditions with snow, drifting, and white-out did not permit much surface work to be carried out today. .

This morning we said goodbye to the Polar 6 DC-3, its friendly crew, our Euronews visitors, and our AWI colleagues..

Today we received a C-130 from Sønderstrømfjord (SFJ) that brought us new camp personnel plus a large group of interested Distinguished Visitors. .

Put-in of the NEGIS camp begins

This year NEEM camp is also a staging station for a remote camp on the North East Greenland Ice Stream. .

Early Sunday morning we discovered that the ladies urinal was leaking water...

Although people stop working earlier than normal, a lot was accomplished today.

We have got basal material

One day after her arrival, Christine is already happy to have obtained a series of samples central to her research.

Waiting for good weather conditions pays off. Today we had a very successful mission...

We prepare for the arrival of an LC-130 tomorrow

Lou spent the entire day today driving the Pistenbully up and down the skiway to till in the new snow in preparation of the plane tomorrow.

Today weather turned bad. It has been cloudy with snow most of the time.

To fly or not to fly

It looks as if the good weather is coming to an end.

A busy and successful Sunday

Simon and Trevor had originally signed up as cooks for the Saturday evening dinner; but as plans have changed

A day with changes of plans

Polar 6 arrived this afternoon in splendid sunshine. On the way here, it picked up detonators for seismic studies in NEGIS camp...

A gloomy day with a gloomy technical fault

Well, actually the bad weather returned with thick clouds, snow and blowing snow. We had to cancel a planned flight of Polar 6.

36 hours of bad weather over

We cannot believe our luck. A big change in weather as we experienced yesterday is normally associated with high winds and severe snow drift

Weather changed today. While the day began almost as usual, the weather
changed rapidly in the afternoon.

After a good party Saturday night, activities in camp began with the departure of Polar 6 on a radar mission.

It is Saturday and we have a full house for dinner

Although it is Saturday, there is a lot of activity in camp and in the air space over the North Greenland ice sheet.

Work in camp on track and aeroplane operations on track

The fine weather continues to help us a lot.

An interesting routine is developing. In the morning we send off two
aircraft

It has been a very busy and successful day.

Tomorrow NEEM will turn into an airport

Today we were notified that three aeroplanes intend to fly to NEEM tomorrow.

We got one more day before next flight

Work progresses in a fine pace; but still everybody in camp is happy of getting an extra day for preparation before the flights.

Preparations for flights and more crew in full swing

Most efforts in camp are now centered on preparing camp for a large number of people arriving Tuesday, Wednesday and Friday.

It is Saturday, and this means that people get a shower and dress up for Saturday night dinner.

Camp opening is well under way

The day began with good byes.

Today the last small problems were solved, and the camp is now fully operational.

Most things went fine on this beautiful second day at NEEM.

This year the put-in happened on schedule.

The NEEM field office in Kangerlussuaq is now manned and the 6th. NEEM field season on the ice is starting up

In 2009 the drilling continued and measurements on the ice core started. The drilling reached 1757.84 meters depth. Read the 2009 field diaries here.

In 2008 the NEEM camp was constructed and the drilling started, paving the way for the first full field season of 2009. Read the 2008 field diaries here.