A day with changes of plans

Erin and Dan celebrating a successful completion of sonic logging.

Polar 6 arrived this afternoon in splendid sunshine. On the way here, it picked up detonators for seismic studies in NEGIS camp in two weeks time. The explosives will arrive later.

As we have decided to go forward slowly with the drill rescue, making the right tools, having glycol ready and having several alternative methods ready at the same time, we decided to send the Danish shallow drill along with Polar 6 to perform 30 m ice coring at a number of sites the AWI has designated. First drilling is planned for tomorrow.

Field work requires constant planning and changes of plans; but we believe that we have found a good solution. The Polar 6 crew said that the skiway has improved with the new groomer and we have high hopes that the 109th will be just as satisfied next week when they come.

Erin and Dan are happy as their task, sonic logging, is successfully completed.

Ad.1: As substitute for the German drill, we plan to send the Danish shallow drill with Polar 6 to the shallow coring sites designated by the AWI team in the coming days.

Ad.5: The logging team completed a full profile going down, and a second profile from the bottom to 900 m depth at high resolution. 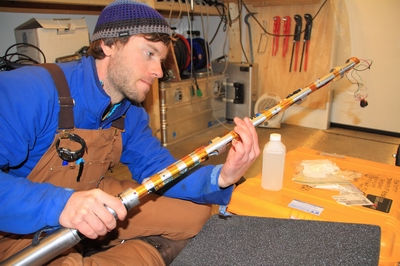 Dan repairs the sonic logger in the drillers workshop. 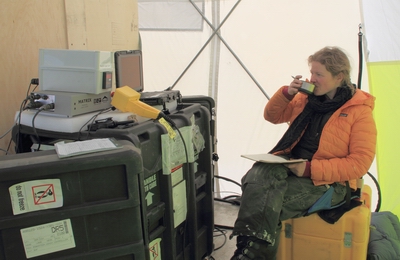 Erin watches the data output of the logger during logging.