A busy and successful Sunday

All what’s left of NGRIP camp. To the left a lonely road sign. To the right the 3 m casing pipe which allows access to the 3080 m deep NGRIP borehole. Trevor and pilot Erik are standing on the main dome and are about to open the top hatch. Marja watches in the background.

Most people in camp were up and about at 8.00. The Basler took off at 10.00 with Trevor, Sepp and Marja, while Simon stayed back to work on the antitorque of the deep drill. Tyler and J.P. finished the first stage of excavation of the test trench. Lou and Sverrir with the assistance of Erin and Dan moved the logging equipment to the cargo area, and Martin, Philip, Carsten and Sverrir took part of the rescue operation. Mirena and Jakob helped Sarah in and around the main dome.

Weather is really nice and easy to work in. People have to take care not to be sun burned, and we hope weather will continue like this just a little while more, although we know that it cannot continue indefinitely.

Ad.1: We hope to be able to send out three pallets with equipment.

Ad.3: The drilling of 30 m core at NGRIP was completed in fine weather.
From touchdown to finish packing took 4 hours and 20 minutes. The group then had a chance to visit the NGRIP dome. The top hatch is still visible and everything inside is in good order. There is one triangular panel in the generator room pushed in by the snow. This dome has now lasted 16 years on the snow. The NGRIP casing is 3 m above surface, and the road sign is 1.8 m high. The skiway is gone, and the most visible feature is the buried Lucht Castle. An aluminum pipe with a bamboo pole will mark the dome after the top becomes buried.

Ad.4: Sunday afternoon there were two attempts to place a hooking tool in the top of the drill, but without success. In the third attempt Sunday evening, the team succeeded in placing the special tool in the top section of the drill and lock it. A borehole camera showed the operators the top of the drill, and five 6 m long aluminum pipes coupled up provided the means of manipulation and locking the device in the deep.  Two flags are right now missing in the flag line because their poles were used as pipes. 200 kg pull was applied to the cable and glycol added through the pipes. After one hour the drill was free and slowly hoisted to the surface by a very anxious and happy crew.
The drill is up thanks to a good team work of Sverrir, Simon, Martin, Philip, Carsten and Lou. 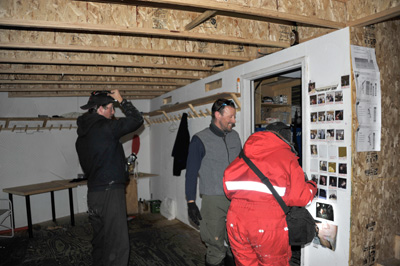 In the NGRIP dome: After 16 years, the dome still holds up. Erik, Trevor and Marja are studying the pictures on the wall in the dining area. 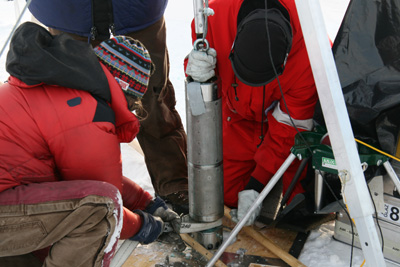 Drill rescue: The drill coming up from the deep, hanging in a special tool. As soon as it reached the surface it was secured with a cargo strap.