Deep field drilling at 80 degrees North. Trevor operates the drill while Basler mechanic, Gerard, is watching and to the right pilot John is talking to Sepp while Mirena is logging the ice cores.

Simon and Trevor had originally signed up as cooks for the Saturday evening dinner; but as plans have changed Simon, Trevor, Sepp and Mirena went with the Basler for deep field drilling at German drilling site B21. The operation went well. They departed at 9.00 and were back at 16.45 with 31 m ice core. Luckily for our Saturday dinner others volunteered, and Erin, Dan, Lou and Tyler became cooks.

It became a fine Saturday evening, however everybody were a bit spent and most went to bed early. By midnight all was quiet in camp.

Ad.1: Several plans are in play and we attempt a rescue tomorrow.

Ad.4: Aided by the very fine weather the drilling crew of four and the air crew had fine day out with approx. 5 hour stay.

Ad.5: The skiway is more even than previous years at this stage of the field season. 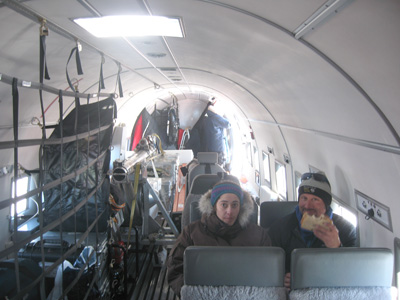 Compared to the Twin Otter, the Basler has a lot of room. Mirena and Trevor are in their seats and behind them to the left is the complete drill system.