Organization of the NEEM project

The NEEM project was both a logistic undertaking and, still is, a scientific collaboration. The logistic work was coordinated by the Danish Centre for Ice and Climate.

The operations in Greenland require a close collaboration with the US Office of Polar Programs, National Science Foundation and the NSF contractor in Greenland, CPS Polar Field Services (formerly VECO Polar Ressources). These organizations played a vital role for the NEEM project, both because NSF was the second largest contributor to the NEEM budget, and in the practical work of organizing and coordinating the flights to the NEEM camp. These flights took place in Hercules airplanes owned by the NSF and operated by the U.S. Air National Guard. The NEEM logistics team was led by J.P.Steffensen and had full time logistics coordinators, Lars Berg Larsen and Michael Valentin Strand. In a project like the NEEM project there was no clear separation of science and logistics, and it is therefore expected that participants from all international partners in the NEEM project took part in logistical tasks during field work.

Each year the logistics team prepared a Field Season Plan before the field campaign and a Field Season Report after the campaign for the Scientific Steeering Committee, funding agencies and Danish and Greenlandic authorities.

The Danish Centre for Ice and Climate was also responsible for the ice core drilling operation. It provided the ice core drill - an updated version of the successful Hans Tausen/NGRIP drill, modified to meet the requirements of a new environmentally friendly drilling fluid. The drilling group was led by Sigfus Johnsen together with Steffen Bo Hansen, Simon Sheldon, and members from several partner nations.

NEEM is governed by the Scientific Steering Committee (SC). It consists of appointed members from each participating nation. The chairman is Prof. Dorthe Dahl-Jensen. From 2007-2015 meetings were held once or twice a year, and are open for everybody participating in the NEEM project.

The tasks of the Steering Committee included 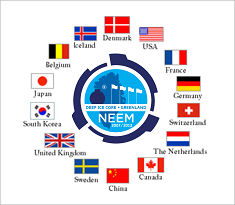