The drill used for the NEEM ice core drilling is based on a design that goes more than 3 decades back to the DYE-3 deep drilling in South Greenland. The drill is a self-contained unit only connected to the surface by an 7.3 mm thick steel cable. Inside the cable, power for the drill is transmitted together with control commands from the operators.

The drill is about 13.5 meters long, and is shown here with the outer barrel (indicated by green) removed. When operational, only the drill head and the anti-torque section (lower right) are visible. 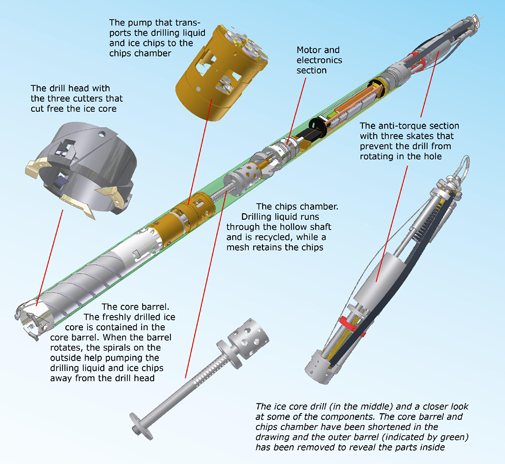 The middle section of the drill contains a pressurized compartment including the motor and electronics section. Near the base of the ice sheet, the pressure is about 270 times the atmospheric pressure at sea level, so the seals must be of very high quality.

The top part of the drill is the anti-torque section that prevents the drill from rotating in the hole. Three spring-loaded blades cut their way into the ice and ensure that the motor rotation makes the drill head and pump rotate, instead of spinning the entire drill the opposite way.

The drill contains up to 4 meter of ice core. After a section has been drilled, rotation is stopped, and the cable is pulled. Small spring-loaded knives - "core-catchers" - cut into the ice core and prevents it from gliding out of the drill. A force corresponding to a drag of 400-1000 kg is needed to break the ice core, which is then brought to surface.

On the surface, the drill is disassembled, and the core is pushed backwards out of the inner core barrel. The chips are removed, and after re-assembly, the drill is ready for another trip to the interior of the ice cap.

Drilling trough the about 2½ km of ice at NEEM will require 8-900 drill runs, each taking from 40 minutes to several hours depending on the depth. The drilling will start in 2008 and is expected to be completed late in the 2010 field season or during the 2011 field season.

Watch how the core catchers are mounted in the drill head:

See the drillers at work in the drill trench:
(Watch Flash movie below or download MPEG4-movie)