Activities of the geophysical survey and remote sensing consortium

The Geophysical survey and remote sensing consortium conducted airborne and ground based radar surveys between North GRIP and NEEM and around the NEEM drilling site during the 2007 and 2008 summer field seasons. These surveys were undertaken to help verify the best site for obtaining deep, undisturbed Eemian ice from the penultimate interglacial by characterizing deep internal layers and basal conditions, and to evaluate near-surface snow accumulation variations and trends associated with geography and climate change

In 2007, three surface-based radar systems, two from the University of Kansas’ Center for Remote Sensing of Ice Sheets (CReSIS) (Fig. 1a) and one from the Alfred Wegener Institute for Polar and Marine Research (AWI) (Fig. 1b), Bremerhaven, were deployed to North GRIP camp, Greenland. These included a 0.5 - 2.0 GHz, Snow Accumulation Radar, a second high frequency Ground Penetrating Radar, and a 120 – 300 MHz Radar Depth Sounder (RDS), all developed by CReSIS, and a commercial radar system. After setup and testing, measurements were recorded nearly continuously on the 380 km traverse from NGRIP to NEEM along the ice divide (Fig. 2) and on a zigzag track across the ice divide by CReSIS and AVI respectively, and over a 10 km x 10 km grid centered on the NEEM deep drill site.

CReSIS personnel also conducted an Airborne Radar survey on an Orion P3-B aircraft (Fig. 3a). The data were collected at 140 to 160 MHz by an FM RDS system. The survey generally covered the northwestern high flow glaciers, Jakobshavn outlet glacier and, of particular interest for this project, the ice divide (or ice ridge), from NEEM to North GRIP. Both CReSIS and AWI, with its ski-equipped polar research aircraft (Fig. 3b), carried out extensive airborne RES flights prior to the start of the NEEM project.

During the summer 2008 field season, CReSIS sent an improved version of the surface RDS system back to NEEM to obtain more detailed deep layer and bed data along another 10 km by 10 km grid centered on the drill site and along the ice ridge.

The 2007 airborne radar data, the 2008 surface RDS data, including echograms (Fig. 4), fully processed digital thickness and bed elevation maps (Figs. 5 and 6), and the Accumulation radar data (Fig. 7) have been shared with the Centre for Ice and Climate. MATLAB compatible data sets and PDF – formatted files containing locator maps and echograms from the 2007 airborne campaign are accessible for downloading from the CReSIS website (opens in new window).

The remaining CReSIS data sets will be available at the above web site soon. Efforts are underway to archive all of the CReSIS data with the National Snow and Ice Data Center (NSIDC).

CReSIS is currently working on interferometric processing of the RDS data for separating causes of the 20 dB variations in returned power from the bed, looking into birefringence effects, and conducting a more detailed analysis of the Accumulation Radar data. For summer 2010 AWI plans another airborne survey centered above the NEEM drill site in order to study the regional variation of the sub-glacial bed and the isochrones in the ice sheet above.

Click the pictures and figures to see higher resolution versions.

Figure 1a: The CReSIS surface-based Snow Accumulation Radar and RDS systems in action.  The accumulation radar antennas can be seen extending off the right side of the vehicle, while the RDS antennas are visible on the sled behind the vehicle.

Figure 1b: The AWI surface-based Ground Penetrating Radar system sled on its way from NGRIP to the NEEM drill site. 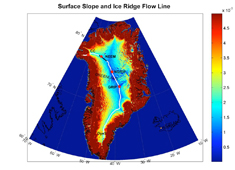 Figure 2: Locator map shows NGRIP and NEEM field camps in Greenland.  The white and blue line connecting the two sites shows the approximate route followed by both the surface traverse and airborne survey in 2007. 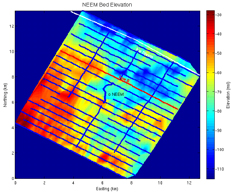 Figure 5: Digital Bed Elevation map around NEEM. The red line (Line 8) indicates where the echogram in Figure 4 and the SAR bed image in Figure 6 were mapped.

Figure 6: Side looking SAR image of bed.  This image corresponds to data collected along Line 8 in Figure 5.

Figure 7a: Echogram from Accumulation Radar between NGRIP and NEEM from the surface to 120 m depth. Annual and subannual layers can be traced along the entire 380 km distance. 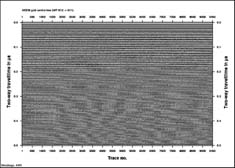 Figure 7b: Radargram of a 10 km long profile perpendicular to the ice divide centered at the planned the NEEM drill site. The line was recorded during the 2007 survey. The gradient of the detected isochrones reveals the local variation of the accumulation.

Photos can be used freely with clear reference to the source: NEEM ice core drilling project, www.neem.ku.dk. Please also acknowledge the photographer if a name is provided in the mouse-over texts.