The final run – drilling into the rocks?

Very warm weather at NEEM delays the DV visit. The weather at NEEM at 4 am was foggy with temperatures no colder than 5 °C. The DV mission to NEEM was cancelled and the camp hurried to finish project – taking advantage of the extra day. Two extra ‘final runs’ where made with the rock drill and during the runs the current suddenly jumped to a higher and more stable mode. We are pretty sure we are drilling into rock during these two last runs. The drillers estimate we penetrated 10 cm into the rock but we did not succeed in breaking and pulling up the core. The basal water is rising slowly in the hole and the drillers needed to mount an extra long skate section to get the electronic connections above water.

Ad 5:
NEEM Deep drilling 2011
The 2010 season ended with a series of drilling runs without penetration and badly damaged cutters. The 2011 season was started with the ICDS rock drill in combination with the Bern pump and the CPH super banger, the standard motor and gear section with 75 rpm, and the 70-kg deadweight from LGGE. This provides a maximum load on the cutter head of approximately 120 kg in the drilling fluid. A test drilling at the surface into granite showed the drill was able to penetrate at a rate of approximately 1 cm in 2 minutes. We first drilled through approximately 80 cm of coarse grained ice of unknown origin. The following runs were then made with the new carbide step cutters mounted on the standard drillhead and the HT drill. During the first run a short circuit in the anti-torque section (AT) pointed to the presence of conductive material in the drill hole. After improving the insulation in the AT section, 74 cm of heavily silt loaded ice cores have then been retrieved in three runs.  A broken carbide insert and ground adapters for the inserts were a sign that we had encountered of a larger rock piece. We switched back to the rock drill. After a few runs, two additional 70-kg dead weights were added on top of the motor section, resulting in a maximum load on the cutter head of 240 kg. The fluid flow direction had been chosen to suck the drilling fluid into the core barrels with the intention to collect the rock cuttings and bring them to the surface. However it turned out that the clearances in the rock drill, especially the annulus between outer and inner barrel were too small for this flow direction (reverse flow in rock drilling) leading to rapid clogging with ice chips and silt. Refrozen water at the drill head was then a clear sign of liquid water in the hole, explaining the short circuit in the AT. We lowered the video camera into the hole and found a layer of almost one meter of basal water at the bottom of the hole. We changed the fluid flow direction to forward flow mode leading to stable and low drilling current. In the following two runs we drilled with low penetration 0.5 m of sediment rich ice. The runs lasted usually just over one hour and were finally stopped when the motor temperature exceeded 60 °C . The core diameter varied between 2 and 3 cm (3.3 cm nominal) pointing to a wobbling head and possibly drilling by partial melting of the ice. Another run with carbide cutters on the HT drill finished again with broken inserts and damaged insert adapters. Therefore we continued with the rock drill. We have retrieved a total of 63 cm silty ice. During run nr. 10 with the rock drill we observed a sudden rise in drilling current from 6 to 11 A. The run continued in a very stable mode at approximately 40 rpm, a penetration about 3 more centimetres, but without bringing a core up. The screen mounted around the pump was clogged with a thick layer of very fine silt, a clear sign that we were cutting rock. The next run started at low current, but soon reached the stable high current rock-cutting mode again, but this time at full rpm. We drilled an estimated 7 cm deeper. Unfortunately three attempts to catch the “core” failed. The length of the rock drill barrel and the flight schedule determined the end of the 2011 deep drilling. 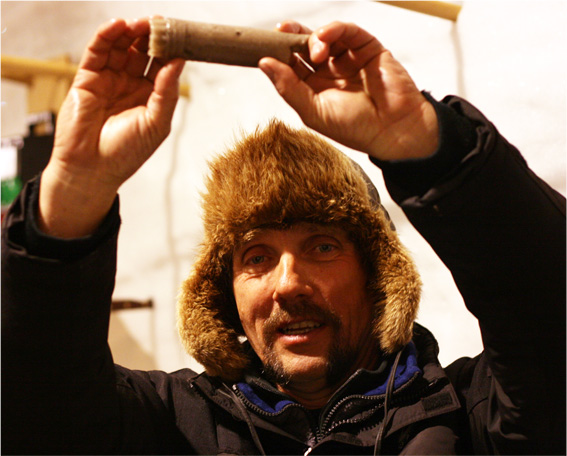 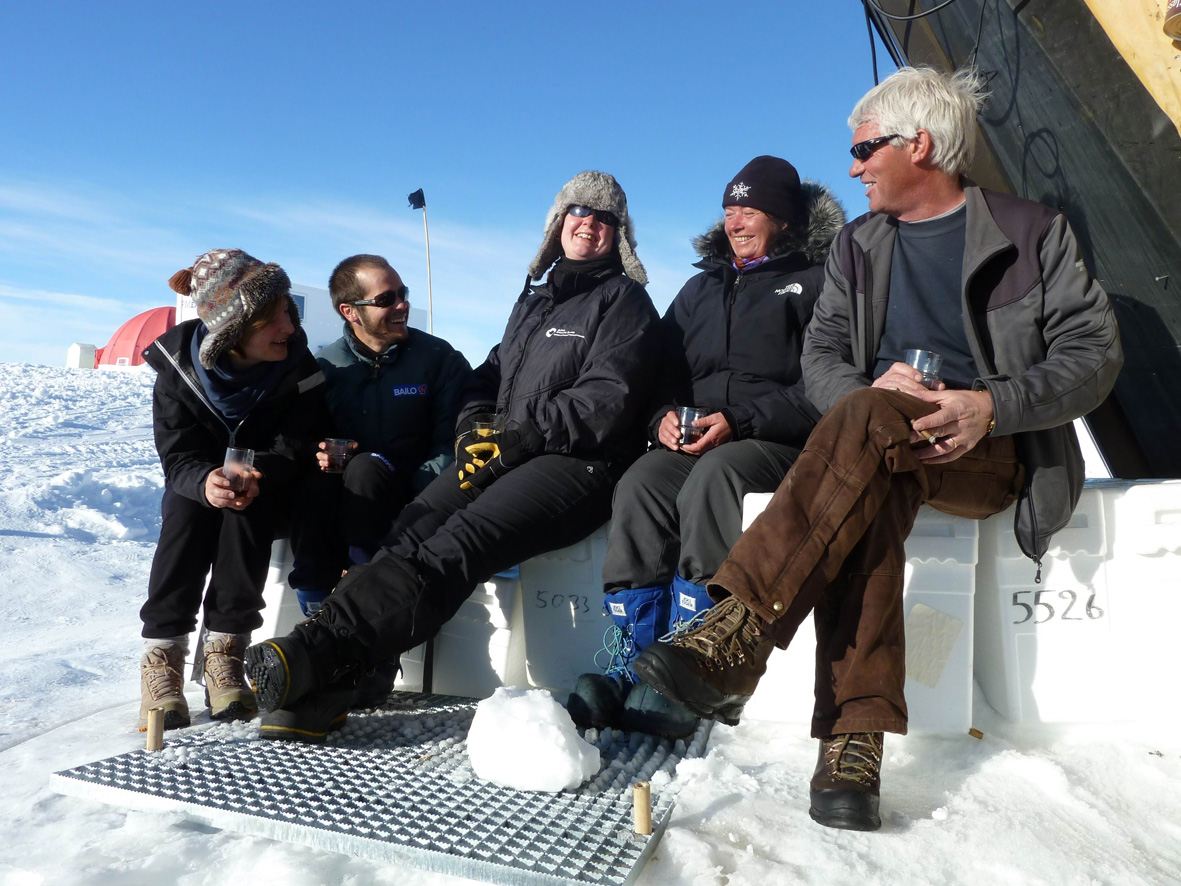 Waiting for the Distinguished Guests