An amazing day with great successes

Christopher lowering the camera to view the replicate drilling progress.

The idea of replicate drilling is to be able to drill a second ice core at a pre-set depth.
The drill must ‘bit’ into the wall and gradually grove a new ice core.

We started in the morning and before dinner we had succeeded in sideward’s drilling.

After dinner we mounted the deep borehole camera on the pressure tube of the deep
drill and lowered the camera to the bottom of the 2537m deep liquid filled
borehole. See video sequence at Ad.8 here below.

There turned up to be no ice cuttings close to the bottom and we achieved a very clear picture of the bottom of the borehole.

What we have done today:
1. Replicate drilling in the 2011 S” borehole
2. Camera observations of the replicate drilling
3. Temperature measurements in the 2009 S1 borehole
4. Cfa team has drilled core 5 of the 12m deep hand drilled firn cores
5. Cfa team has measured core 3 of the 12 m firn cores
6. Tower of vapor station has been erected (see picture tomorrow)
7. Skiway has been zig zag groomed with beamer and apron groomed with thiller.
8. Deep borehole has been monitored with a new deep camera system
9. 3 skidoos have been taken out of use because the engines are damaged and need
repair or replacement

Ad.1
The planned replicate drilling test was successfully conducted using standard O 126mm cutters which had been made aggressive on the outer edge.
We deployed the drill in the 2011 S1 hole and started the deviation in  a depth of 110m.
The 3 - 4 degrees inclination of the hole provided a side force on the drill head of a little
more than 20N. This proved sufficient to make the drill cut into the downwards side of the hole, in a way that just 8 runs was needed to create a new independent hole. The
complete deviation occurred over a distance of 10m.
Drillers, Steffen Bo Hansen

Ad 8.
A 20 second low resolution video of the camera descending to the
bottom of the deep borehole has been released from camp.
NEW! See the video here. (Downloades to your computer).

The first replicate core. The core gradually gains area as the drill pushes further and further out in the side wall of the original borehole. 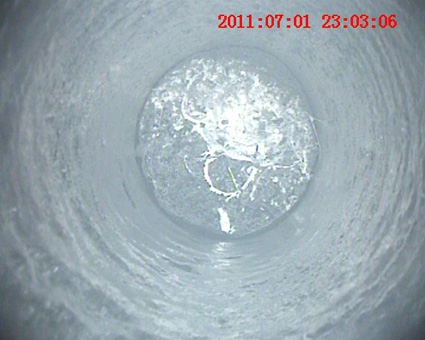 Picture of the bottom of the 2537m deep NEEM borehole. 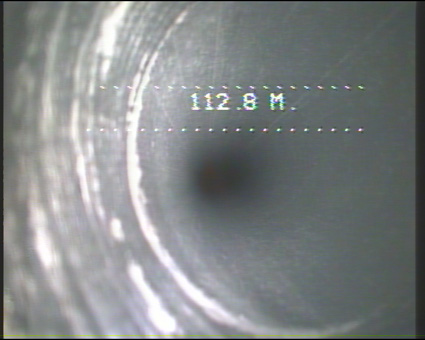 The first replicate core. The core gradually gains area as the drill pushes further and further out in the side wall of the originalborehole.