The sun is getting low at midnight and we get the colorful sunsets at NEEM – a sign that autumn is coming!.

1. Drilling with the NEEM long drill: 17.88 m. Drillers depth: 1722.92 m
2. Logging 25.30 m of core. Logging depth 1738.59 m
3. CFA analysis: packing the CFA equipment in boxes for retro to Bern, BAS and Copenhagen
4. Processing 29.70 m of core. Processing depth: 1698.95 m ( 3089 bag )
5. Lowering and leveling snow around the main dome
6. Building winter hills for overwintering equipment
7. Successfully deployed 1.3 liters of drill fluid containing microspheres to the bottom of the deep hole (1730mbs) and drilled a full core. The beads were contained in a plastic sleeve that was ripped open once the drill was at the bottom of the hole.  A section of the core will be analyzed for the infiltration of the beads into the core over the next few years.

Ad 1: Drillers report August 13th: “Today we deployed the first “bead bomb” down the borehole in support of Todd Sower’s biological experiment.
A solution of 1 uM fluorescent beads in drill liquid was attached to the hallow shaft in a polyethylene bag reminiscent of the Cognac Bombs used for warm ice drilling. The beads were released at the bottom of the bore hole when starting the drill motor and the bag was sliced via a sharpened Hansen Spring mounted through two of the small holes in the upper part of the outer tube.  A slow descent was used with the upper valve closed to protect the “bead bomb” while at the same time filtering the whole (which was very clean). The whole operation took about four hours.

Otherwise drilling went fine throughout the day. As the night shift begins a blockage in hallow shaft will be need to be cleaned out. Normal drilling will continue through the regular late shift tonight and the first part of the morning shift, after which time we stop normal operations and make room for testing the smooth outer barrel for the rest of the day.”

Weather: Changing overcast with light snow from time to time. Temperature between -13 to – 8°C. Wind 8-10 kn from SW. 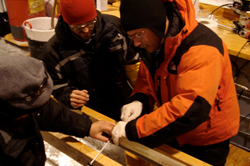 Todd, Trevor and Steff attaching the plastic bag containing drill liquid and beads to the drill.