The first snow the last 3 weeks

Believe it or not – we had several very happy scientists in camp because we got overcast with snowfall. The sampling of snow started together with monitoring of the weather. We had a very busy day pulling cables in the camp. The snowblower was used to make a trench dividing the camp in a west and east end for the power and LAN cables to cross the camp. In the dome plumbing continued together with carpenter activities. Outside the dome we started to glue the rubber panels on the dome again. Half of the panels have fallen totally off and this causes a problem because the glue we have is latex and meant to glue rubber on rubber. In the science trench the installation of the swiss saw and the ecm began. A bandsaw was installed a few days ago by a professional (Thomas). We are ready for the ice cores from the firn-gas program!. The MASE generator was moved to the firn-gas site where preparation still is going on. Because we only have one Viessman building at the site a big dome tent has been set up for the US activities. The last 20cm of reaming with reamer 4 was done and modifications of the new reamer 5 began. 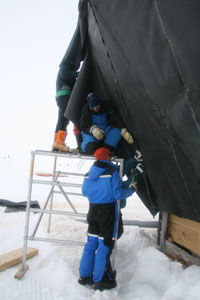 Gluing the rubber panels on the outside of the dome.