Success with the fueling system

Workspace on the first floor of the Dome.

Friday we received the last 13 people in NEEM for this flight period and said goodbye to Claus. We are now 32 in camp – a very high load with the still rather primitive camp we have. During the flight mission we tested the fuel pumping system and after some misunderstanding on which direction to pump we succeeded in pumping fuel into the Skier. The opposite was not tested because it would require exchanging of the pipes. We will work on a system where both ways can be done without exchanging pipes. 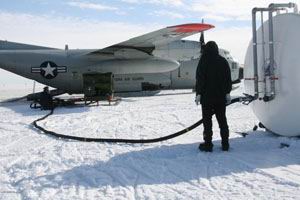 The Viessmann building was build around the generator standing on the sledge. Unpacking of cargo continued. Reaming started with reamer 4 but during the afternoon the reamer was stuck in a depth of 38.4 m. 30 l of glycol was poured into the hole and during the evening the reamer was free again. In the dome a bench was made along the round wall. For the first time we could see that it IS possible to be 32 dinning together in the dome.

Ad 2: The operation went really smooth again and we are grateful for the ground time allocated for testing the fuelling system. Again thanks to the crew of Skier 94 for a great operation.