A very successful day for the BAS radar team, Fabian and Tim

A good and very windy day with blue sky. The day started very early for Michael and Dorthe with the main camp generator on strike at 2 am. The day was much like Thursday with focus on the dome, but with a small team working on the trenches and reaming instead of drilling. Today was Valeries unlucky day: in a few hours she managed to cut the power cable from the generator with the snowblower, 10 min later to get the snowblower stuck in a loose snow hole. Finally she cut her hand with a breadknife (after several days with no accidents nailing thousands of nails in the science trench roof). She decided to use the rest of the day assembling IKEA bunkbeds. 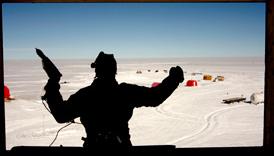 The hardworking rappelling team on the dome shell

Ad 4 BAS Radar with Fabien Gillet-Chaulet and Tim Burton Since our arrival the weather has been fantastic, the hospitality great and we had a successful GPS Topo survey of the region in order to decide on the radar lines (with thanks to Louise and Marianne for their patience whilst driving at a not very exhilarating 12mph!) However, the Radar has been very frustrating. Sometimes it worked, sometimes it didn´t. Four days of on and off, stop and go but finally the problem was solved yesterday by Hans Peter with his skilled use of a soldering iron - thanks!! The first line was completed today with 33 radar and 24 high resolution GPS points. So now to the other line in time for our departure next week on Thursday. Fabien will be busy tomorrow – after radar action in the morning he is joining Valerie (another French member of camp) and creating a French Feast. Tim has volunteered to chop garlic, drink red wine and hang some onions around his neck…