The drilling of the NEEM pilot hole was finalized at the depth 106.16m

A good and windy day with blue sky. Construction of the main dome continued and the highlight was afternoon tea on the stair in the dome. 8 persons worked on the dome in 4 teams: the stair and door team, the first floor outer ring team, the first floor support beam team and finally the dome shell team placing screws in the panels on the outside of the dome. Great progress - but very time consuming with all the ‘round’ angles. The drillers and logger reached the final depth of the pilot hole. The ice cores are of good quality, in average each run has produced 1 m of ice core in 1 piece. The drillers started to localize the equipment needed to ream the hole to a greater diameter. 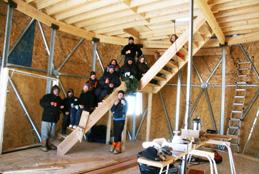 Afternoon tea on the just finished stairs in the dome