The first fuel tank is on sledge

Work in camp: windows in main dome and fuel tank on sledge.

Good weather with slightly higher winds than the previous days. Ground floor windows have been mounted in the dome and the staircase is halfway up. The front door has been prepared to be mounted. The first fuel tank has been mounted on its sledge and we will start testing the fuel pump in a few days. Drill goes on steadily with a few hours of generator problems during the morning. The team still had energy to play Meyer (dice game) at midnight. 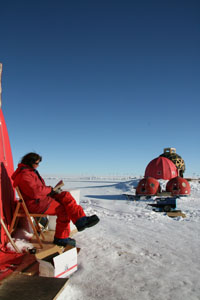 Enjoying the evening sun outside the kitchen dome.