The main task of the day was to build the science trench roof. While building we received guests.

Receiving Pete and Pete arriving on ski to NEEM.

Friday was a day with warm temperatures. In the morning we had high overcast and low winds. We received skier 73 and received the last cargo for this week. We got the first of the 3 fuel tanks to camp together with the fuel pump and we are looking forward to use the fuel system. The main task of the day was to build a roof on the science trench and the whole camp worked on this task. During the afternoon we suddenly saw 2 persons on ski watching us! Pete and Pete from Finland have been skiing from South Greenland passing the research stations Raven, Summit and NGRIP before reaching NEEM. What a surprise. They stayed in camp overnight before they continued to Quarnaq. Read more about their expedition on www.expedition.fi/greenland2008.

Building the first half of the science trench roof 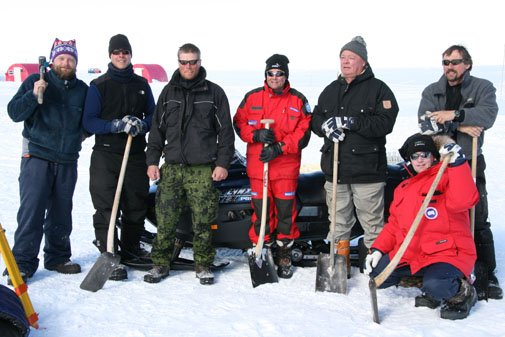