Moving the Dome back to its original position just 4.5 m higher.

The time has come to move the Dome back to its original position but 4.5 m higher. The procedure is the same as last time. Early up – pack and prepare the Dome and then move.

This time we all know it is possible and the focus is on taking good pictures. Today the Pisten Bully is alone and needs no help from the Flex.

In the Dome an experiment has been prepared (a camp of scientists…). On the shelves emptied for plates and glasses a few items have been placed to test how stable the move has been. Even the two glasses on top of each other are still there – just a little water spilled...

After the move water systems, electrical power and water and dome heating by the generator excess heat are re-established.

Renato had the remark of the day. He was packing the vapour equipment and came back for coffee at 1000. When he entered the Dome he said: “You are late moving the Dome”. What he had not noted was that the Dome HAD been moved and he obviously had ‘forgotten’ where to find the Dome.

CReSIS cooked a fantastic American dinner and we had a great evening. Thanks for the dinner! 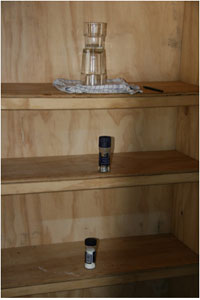 Test of the stability of the Dome during
movement  – picture is from after the move. 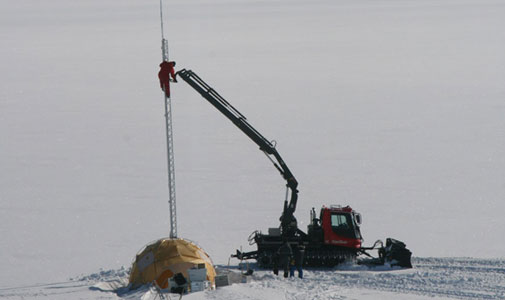 Taking the vapour measurement tower down at NEEM.