D-day for moving the NEEM Dome on sledge

The Dome is now on the NEEM main street.

After a night with stage fever and nerves, time came to move the Dome.

Breakfast had to be finished before 0800. At 0930 the Dome was secured and at 1000 power lines and water lines were detached from the Dome. At 1010 the Dome was pulled the 50m up the ramp with a slope of 6 deg by the Pisten Bully and the Flexmobile. The move took one minute!

The Dome is now standing proudly on the main street while the hole and the ramp is being filled in with snow. The plan is to move the Dome back to the original position, but in level with the 2011 surface on Saturday.

A dream has come true – and the Dome is ready to be pulled to the next drill position.

What we have done today:
1. Monitoring of water vapor
2. Japanese aerosol station monitoring
3. Moving the Dome to the NEEM main street
4. Filling the Dome snow ramp in with snow again
5. Departure of the drill traverse to the Ice2Sea site 77.85210N and
52.02630W
6. AWI drill depth 50 m
7. Flying the Meridian on skies

Ad 5
The Ice2Sea team reached the drill site at 1900 and started drilling
the 40m ice core.

Ad 6
The AWI drill team started drilling at 2000 and planned to drill
through the night.

Ad 7
The Meridian had some unexplained problems and after lunch the
CReSIS team worked on troubleshouting the event. 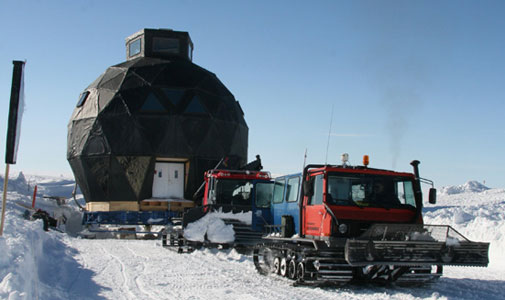 Dome being pulled by the Pisten Bully and Flexmobil.

A big salute to the Dome movers: Villi, Alli, Sverrir, Gunnar and Sepp.