The official termination of the deep drilling project.

After a few runs with no penetration and totally grinded down cutters we made the decision to terminate the deep ice core drilling. We celebrated this with a glass of champagne in the drill trench and every nation present gave a small speech. Later we all went by skidoo to the shallow drill site 3 km from the NEEM camp to enjoy an afternoon of with scones with whipped cream and strawberry jam. We all dressed for a party and had a wonderfull evening with big smiles everywhere. To imagine – it is done!! 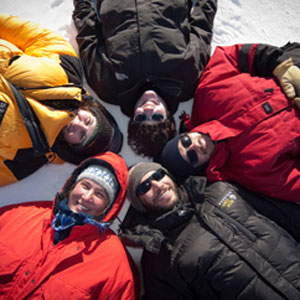 CFA team enjoying an afternoon in the fresh snow

Weather: Sunny day with low temperatures down to -20°C  at night, low winds from SE. During the night ground fog/low clouds came in.