It is amazing how many sheets of plywood that is used every week. With each flight period 20-30 sheets of plywood are shipped to the camp – and often there exists plans for the use of the sheets. But before the plans have been realized, the plywood has been used for other purposes – under tents, for shelves, for boxes…..  Sverrir has a dream of building a Sauna at NEEM and we are still hoping that one day the plywood sheets will be there for him….

Ad.1: Driller’s Report July 16, 2009: “In the drill trench we have experienced alternating good and bad runs today. High drilling current plagues the bad runs right from the start of drilling (short cores) despite a low cutting pitch of less than 2 mm.  A consistent pattern has yet to emerge today, so our efforts will be focused on the drill head, cutting pitch and reexamining the position of the central booster, one step at a time.  One possibility is that the hollow shaft was inadvertently reassembled yesterday in a way that did not account for the
3 mm modification to the junction piece which makes the shaft slightly longer and positions the pump properly in the inner sleeve“.

Ad. 5. Firn air program NEEM 2009: A sealed borehole will be drilled to a depth of 80m, enabling measurements of ultra-trace compounds at various depths. We will measure the concentrations of a large range of gases that are active in global climate, stratospheric ozone depletion, atmospheric chemistry and pollution. 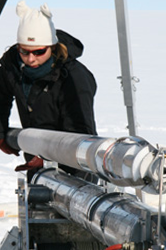 For example, the concentrations of carbon dioxide, methane and carbon monoxide, and their isotopes, which are tracers of the sources of these important gases. Some gases such as mercury vapour and the CFC’s are at concentrations of only parts per trillion. The firn air record also bridges the ice core gas record to the present day and reveals how much the longer atmospheric record is smoothed during enclosure into bubbles in the ice. The firn air program at NEEM in 2009 is being undertaken by atmospheric and climate scientists from CSIRO (Australia) and the CIC (Denmark), LGGE (France), University of Colorado (USA), and University of East Anglia (UK) and IMAU (Netherlands). The cores drilled to access the firn are being analysed by scientists from Dartmouth College (USA). And of course drilling and general support is being provided by people from the main NEEM camp.
Every day, the firn people head off on skidoos or skis to the firn “village” 2 kilometres from the main camp, returning tired, hungry and a little sunburnt for meals and a rest.

Weather: A warm day with night temperatures between Wednesday and Thursday down to -10 and -3°C and day temperatures up to -2°C. Wind 8-14 kn from S to SSE