The big snow removing day - and Laki found for the third time this year!

Snow moving in the trenches.

Today the trenches have reached the stage were new digging projects start. In the science trench the drift at the closed inclined entrance is moved - unfortunately removing the cute penguin cut the day before by Valerie. In the drill trench the ambitious 8m deep trench for the deep drill is initiated and the first 3m are made by a very hard working team. In addition blocks of snow are removed from the wall where the drill cabin is to be partly embedded. In the science trench the very distinguished volcanic eruption Laki (Iceland 1785 AD) is found by ECM in S1 and S2. 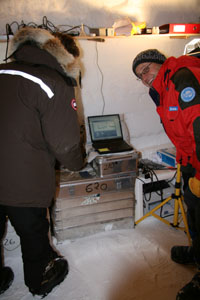 Happy faces when Laki shows up in the ECM

S3 (Mainly used for US Gas Programs)
Gas pumped at the depth 75.0m for MPI
No ice core processed