The drifts in the trenches

Winds picked up in the morning hours from 20 kn to 28kn and before noon we had to call the firn-gas team back from their site 1.4 km from camp. The high winds gave a cold and drafty dome and some time was spent foaming the holes around the windows and between the panels. In the science trench it was decided to start processing the main NEEM ice core from the pilot hole in lack of S2 and S3 cores. The inclined entrance to the drill trench drifted badly in and it was quiet a swim to enter or exit. 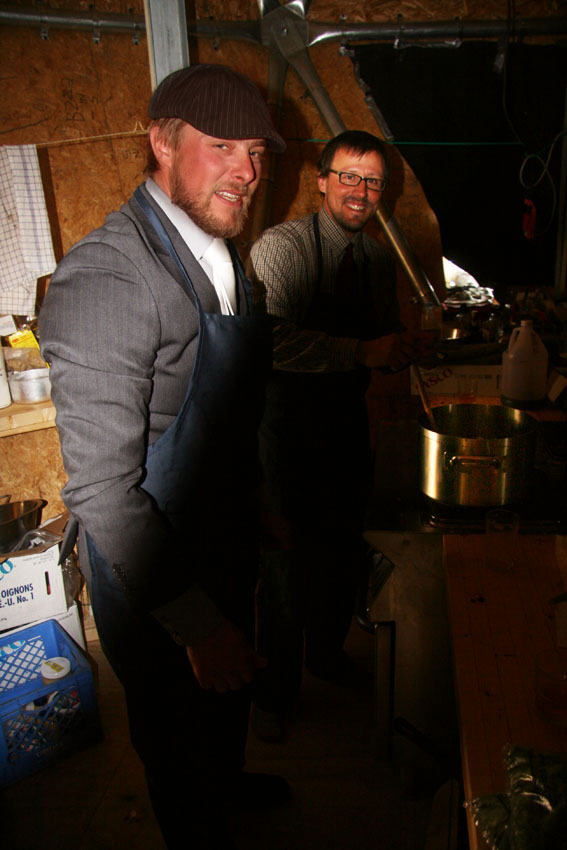 The chefs Trevor and Thomas

We have several sick people in camp – probably a French bug brought to camp during the last flight period. One of our head chefs for the Saturday evening meal – Simon – was sick, but with the help of several volunteers we had a perfect three course meal: spiced shrimps, marinated lamb with vegetables and crepes with berries and whipped cream. Thanks to Trevor, Thomas and volunteers!

Ad1: We did not manage to get running water in the dome as we had hoped. The heat exchange system in the generator needs to be changed to one working in a different temperature regime. This exchange is planned to happen Sunday. As an emergency solution in the storm – showers were taken with a jar of heated water in the shower – the toilet was opened without water and smoking was exceptionally accepted in the bathroom area.