A lot of drifting snow in camp today.

Today the snow storm increased and we had wind speeds of up to 28 knots and drifting snow in 5 m height. Meter high snow dunes have formed around major constructions and as there is almost no contrast people are tumbling their way on the short pathway between the Dome and the trenches. The wind appears to be decreasing in the evening.

The good drill mode from yesterday evening has indeed continued with 7 runs retrieving cores of 3.2-3.5 m length and a daily production of incredible 23.71 m - the highest daily productions of this season!

Considering the warm temperatures at the base of the borehole (probably around -5°C) and the troublesome experiences from NGRIP and other drill sites with warm basal ice, the drilling development over the last 24 h is amazing. Bedrock may now be some 65 m away only. 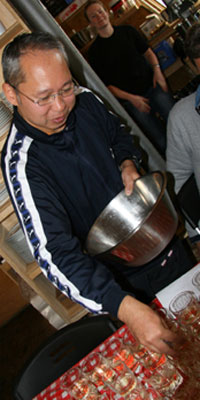 Weather: A very windy day with fresh snow, snow drift, and low contrast. Wind speed was up to 28 knots from SW during daytime. Temperatures have been dropping from -3°C to -7°C during the last 24h. Wind speed is decreasing and pressure is rising at 12pm.

Hello, is there anybody in there? Party ice with bubbles in the drinks.