A driller in action in the drillers cabin in the drill trench. Phillipe has just finalized the drilling of a 3.2 m long ice core. How do we know? The drill is on the way up the borehole but the computer in the drill communicates with the consol on the surface so all information is on the screens in front of the driller.

Ad 1: Drillers report 25 and 26 July, 2009:
“Drilling has become more stable after completely drying out the hallow shaft between Saturday and Sunday. Still, runs begin with a high current that limits drill rpm's, but after a metre or so the current drops an ampere or two and very fine drilling commences. Conditions gradually degraded with each run with high current lasting longer into the run before dropping into a nice mode. But with each run full length cores with complete chip recovery is possible. With the 4th and final run of the short Sunday some of the instabilities of the past days reemerged. The operator must be quite active during these runs. Core breaks range between 900 and 1350 kg of force including cable and drill weight (395 kg). Inclination is 2.41 degrees.”

Ad 5: Sampling and measurement of firn air is now essentially complete. Air from 18 levels from the surface to 76 metres depth in the borehole NEEM 2009 S2 was sampled and analysed over a period of 13 days. Samples include 13 high pressure tanks for UEA/IMAU/MPI, 19 0.5 L glass flasks and 7 large stainless steel tanks for CSIRO, and measurements at the site of elemental mercury vapour (LGGE) and CO2 concentrations (using UB CO2 analyser) at 16 levels. Mercury measurements in the free atmosphere and in the snow have also been made. The CO2 measurements suggest the deepest samples have older effective air ages than expected based on results from the 2008 NEEM firn air program and model-predicted results. If these results are confirmed with sample analyses in the lab of additional species then the samples would represent some of the oldest firn air sampled from firn in Greenland and even Antarctica. The mercury results also show indications of a long uncontaminated record. Cores to 90 m at S2 have been logged and packed for structural properties at Dartmouth (USA) and accompanied by snow pit and hand auger core measurements. NEEM 2009 S2 has been completed at 90 m and samples are packed for analyses. 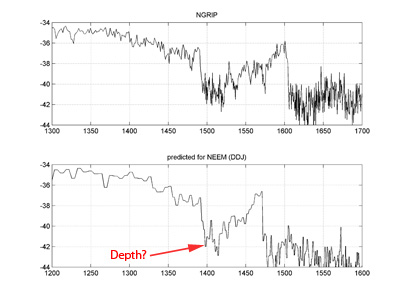