We are out of the brittle zone

Sverrir moved all the vehicles in camp so he could groom the area around the garage. It was quite a parade.

Finally we are through the brittle zone and the ice drilled and logged today will be processed later this week when it has relaxed in the core buffer for some days. The brittle zone started at the depth 600 m and terminated at the depth 1280 m. The ice from this zone is stored in the big core buffer and will first be processed next year when it has relaxed for a year in the core buffer. A small core buffer in front of the big buffer will be used for the coming cores – the cores we will process this year.

Ad 1: Driller’s Report July 21, 2009:
“Good runs all day and night until a bad run ended with a missing small screw from one of the inner core barrel spirals. The run showed classic symptoms of a screw down hole, and on the surface we noted some slight damage to one cutter. With fishing expeditions with the drill no further damage was done to the cutters despite never finding the missing screw on the core or in the slush. The core produced on the fishing run had a high pitch of 3.1 mm which turned our attention back to the drill head. We concluded the hole was clean, we sharpened all three cutters, retuned the pitch, and resumed normal drilling. Inclination is 2.3 degrees.“

Ad 2: The ice seems to be less brittle and today we declared the first core under the brittle zone to be bag 2331 with the top of this bag at the loggers depth 1281.50 m. Note the loggers depth are depths below the snow surface May 2008 while the drillers operate with a different depth defined by the beginning of the borehole 13 m below the surface. The ice between bags 1095 and 2330 is stored in the core buffer to be processed in 2010.

Weather: A very nice and sunny day with blue sky and night temperatures between Monday and Tuesday down to -10°C and day temperatures up to -1°C. Wind: 3-6 kn from SSE to SE. 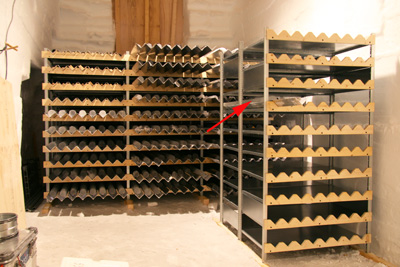 The old and new core buffers. The big old buffer is completely full with the brittle ice and in the new buffer at the front the first core to be processed in the science trench below the brittle zone is waiting…

Today has been a very warm and sunny day with very light wind. The snow was wet like European Christmas snow and Axel built a penguin to watch over the camp. 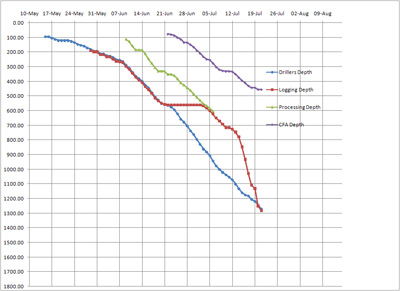 The drilling, logging, CFA and processing production curves from NEEM. Note how the logging and the drilling now follow each other again.